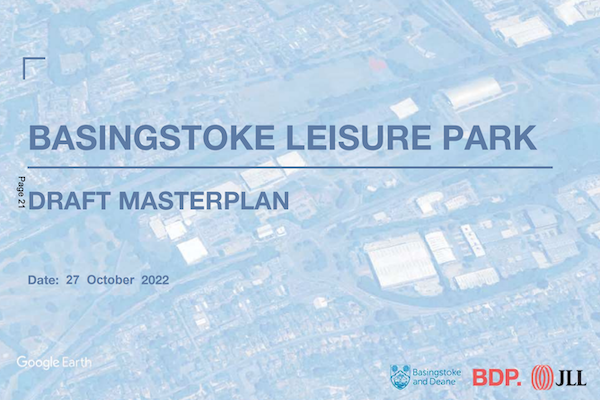 Councillors in Basingstoke have approved a masterplan to develop the town’s leisure park, despite members saying it lacks ambition, has no vision, misses opportunities and should be redrawn.

The document, created by the council along with BDP and JLL last year, was heavily criticised at Basingstoke & Deane Borough Council’s cabinet meeting on January 10.

Cllr Alex Lee told the meeting it lacks scope, ambition and vision for the future.

He went on: “We, as a borough, can do so much more than what is set forth in this document.”

He said the leisure park needed state of the art facilities including a 50-metre swimming pool, upgraded ice rink and a multi-function sports stadium which could be home to Basingstoke Town FC and host concerts and exhibitions.

He added: “We could have a vision for the future, all with climate change in mind, but the current plan misses opportunity after opportunity.”

The council has long had ambitions to redevelop the site but since NewRiver Retail pulled out of a £300 million deal in 2021 to build a retail and leisure park to replace it, the council has set about a new consultation and framework.

Cllr Paul Harvey said: “NewRiver’s glossy pictures of zip slides and a retail paradise of big buildings has, I feel, certainly poisoned the approach to the leisure park. It seems that that debacle has sucked the life out of any ambition and we are happy with whatever we can get from the market.”

Cllr Gavin James said he had had no response to his request for the cost of the project so far so decided to guess the figure.

Chairing the meeting, council leader Cllr Simon Bound, speaking for himself and deputy leader Cllr John Izett, who was not present, said the council has already announced plans for a new £40m aquadrome and a further £20m to be spent across the park

He said new events space, bouldering, parkour, adventure line, outdoor events space and a BMX trail could be included in the new park and argued that, just because the document was called a framework, it didn’t mean those attractions could not be built.