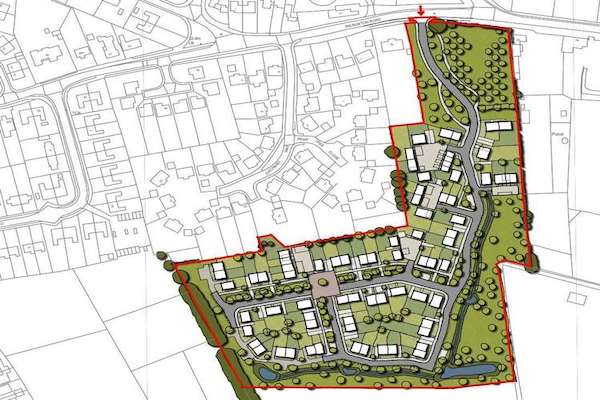 An appeal to build 70 new homes in Haddenham, Cambridgeshire has been refused by East Cambridgeshire District Council because of the impact they would have on the countryside.

The original outline application for the homes in was refused May 2021, deciding it would be “inappropriate development” for the farmland south of Wilburton Road.

In planning documents, applicant Land Allocation Ltd had said: “The proposed development would provide for up to 70 residential dwellings in a sustainable location which will help to contribute to the current housing supply position now and in the future, as well as providing 30 per cent affordable housing, in line with policy. These benefits weigh significantly in favour of granting planning permission.”

However, the council’s decision document concluded: “The proposed development would create another cul-de-sac development on the edge of the village, which is poorly connected and, given its indicative form and layout, would not create a distinctive addition to the village nor retain open rural views.”

The company appealed to the Planning Inspectorate, which has now dismissed the appeal.

The planning inspector concluded the plans would have had a “major adverse effect on the character and appearance of the area”.

The inspector’s report said: “The proposed development of 70 houses would have a typical suburban estate layout.

“The houses would be accessed by a single road which would extend a considerable distance down the side of the ridge into the open countryside some way beyond the extent of built development in the immediate vicinity.

“It would also represent a large mass of development, rather than the more characteristic linear extensions of down the hillside mostly associated with transport routes, thereby creating an incongruous swathe of development in this location.”

The inspector said the site was in a “reasonably accessible location” and was satisfied that there would have been a “genuine choice of transport modes”, though thought the homes could be built there without harming the character and appearance of the area.