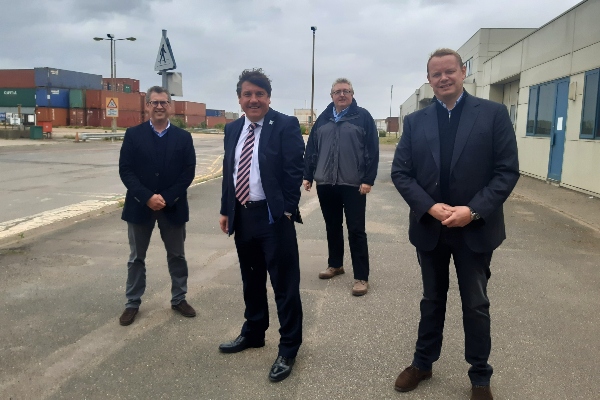 South Basildon and East Thurrock MP, Stephen Metcalfe, has visited the site of Thames Enterprise Park to see how the former oil refinery is readying itself for regeneration.

Rob Gledhill, the leader of Thurrock Council, also attended the tour of the 412-acre site, set to be a major economic centre bringing benefits to the local and regional economy, whilst also being part of the Thames Freeport.

The outline plans have been submitted to Thurrock Borough Council, and it is anticipated that the plans will be presented to the planning committee early this summer, and if approved aims to create up to 5,500 new jobs and would be worth an estimated £340 million per annum to the local economy.

South Basildon and East Thurrock MP Stephen Metcalfe said “The opportunity here is massive. It’s a critical time to get investment and regeneration going as we come out of the pandemic and Thames Enterprise Park has a significant role to play, locally and regionally in the recovery. The vision to target specialised industries alongside logistics will broaden the job opportunities locally as well as complementing and building on the success of London Gateway. I look forward to seeing Thames Enterprise Park bringing jobs and commercial activity back to Coryton.”

Director of Thames Enterprise Park Jonathan Whittingham said “It’s been a busy year so far. The successful Thames Freeport bid and submitting the revised planning documents to support the planning application, which is progressing through the planning process at Thurrock Borough Council, has resulted in significant interest from occupiers looking to locate at Thames Enterprise Park. We’re on the cusp of something special at Thames Enterprise Park and it’s been great to show Stephen the site and explain our vision and plans for the development. With a green light on planning permission, we hope to be on-site for construction later this year. We want to bring the site back to economic life in a way that benefits the community, and that Thurrock can be proud of.”

The redevelopment seeks to provide a place that will attract the next generation of sustainable and specialised industries in manufacturing, energy, and logistics to help the UK reach its net-zero emissions and climate change targets, which was boosted by the March budget when they elected Thames Freeport as one of eight freeport bids to proceed.

The new park has already generated occupier interest, with an established firm in the food sector already signed up, and ongoing discussions happening with a biofuels company.

£8.5 million has already been spent remediating over 100 acres of land ready for the next phase of infrastructure delivery, and subject to planning, the first phase known as ‘West Site’ could be on-site and starting construction by the end of the year.