What will the drone superhighway deliver us? 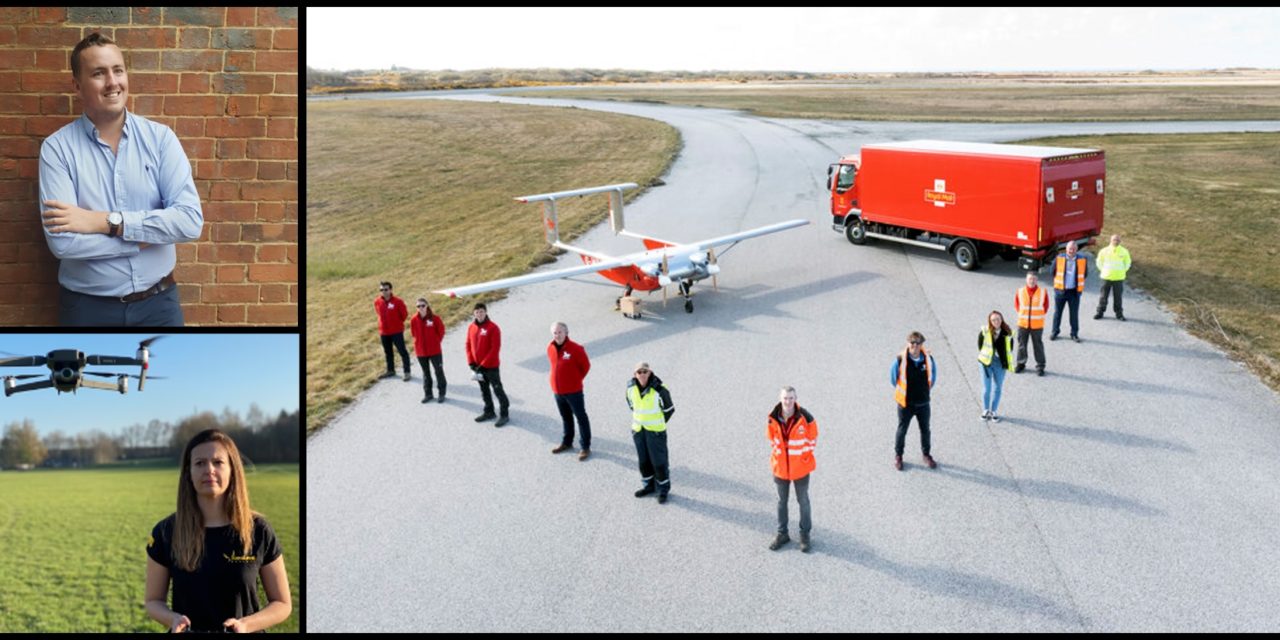 Following news of the new drone test corridor, Project Skyway, connecting airspace above towns and cities including Reading, Oxford, Milton Keynes, Cambridge, Coventry, and Rugby, we asked David Fletcher, associate director at Evoke Transport Planning (pictured top left), to give us his and other industry professionals’, views on the concept.

The drone industry as a whole is definitely at the start of its technology curve with the future significance it has to play in our day-to-day lives still relatively unknown.

Over the last few years there have been some important and exciting trials taking place all over the world, from the Volocopter drone passenger taxi trials in Singapore to the Royal Mail drone parcel delivery trials delivering to the Isles of Mull and Scilly, and the medical supply deliveries from St Mary’s Hospital in London to the Isle of Wight.

Gareth Whatmore, chief executive of DronePrep, which has led consortias of technology providers to undertake a number of real world trials, including the aforementioned Isle of Mull and Scilly Isles trials, said: “At present the regular connections by sea and air to the Scilly Isles are unable to run 90 days a year, due to poor weather conditions or other factors, meaning that parcel deliveries, medical supplies and essential supplies are delayed, impacting people and businesses.”

On the Isles of Scilly project, the drones were able to carry approximately 100 kg of mail and parcels, including essential PPE and Covid testing kits, to the isles to help combat the impacts of the pandemic.

The trial was able to reduce journey times and vehicle emissions as well as improve reliability, efficiency, connectivity and safety with autonomous drones able to operate in adverse weather conditions, unlike the planes or boats which traditionally serve the isles.

Mr Whatmore went on: “The NHS Airbridge trial, operated by Skyports, between the Isle of Mull and the mainland in Scotland, was used to transport diagnostic test samples and prescriptions with journey times reduced from 48 hours to two hours.”

What is clear is that drone deliveries offer significant  journey time savings for remote parts of the UK, whilst also offering increased reliability and reduced human risk. The ability to continue to operate throughout when other travel modes are disrupted, being a key benefit.

What is interesting about the proposed Project Skyway is it looks at a new challenge in an area that, unlike the previous two examples, and far from being considered remote, is actually well-connected by other forms of transport; as such the potential benefits are different, perhaps greatest for middle-mile logistics from distribution centres to retail stores.

With the Oxford to Cambridge Expressway road cancelled in 2021, could Project Skyway offer an alternative and more cost effective, technologically-advanced solution? The East-West Rail link will still help to improve connectivity for passengers between Oxford, Milton Keynes and Cambridge but offers more limited potential for the movement of goods, with drones offering a more enhanced door-to-door service for all.

As such, Project Skyway could help to open the way for reducing the number of goods trips by road.

Likewise, the potential extension to Southampton could help ease the burden on the A34 corridor which experiences high levels of goods traffic from the south coast ports at Portsmouth and Southampton.

At present the Amazon drones only carry weights of up to 2.2 kg but some heavy duty professional drones can carry a weight of up to 220 kg, meaning you would need at least four drones to replace the payload of a single transit van. However, given the infancy of drone technology, the carry capacity is likely to increase over time.

Furthermore, with the corridor connecting a number of the world-leading hospitals, it offers great potential to dramatically reduce journey times and increase reliability for medical deliveries, particularly time-sensitive ones such as organ transplants, which, if delivery is delayed, can result in the organ being unsuitable for transplant.

The journey time from John Radcliffe Hospital in Oxford to Addenbrook’s Hospital in Cambridge by car during peak hours can often be anywhere between two and three hours, whereas a drone flying at 60mph, un-delayed by road congestion, could perform this journey in little over an hour. Importantly, the journey time would also be consistent for each trip. As such, the creation of a drone superhighway could potentially save lives.

A number of garden villages and strategic developments are proposed along the superhighway route and there is a pressing need to bring drones and drone deliveries into masterplanning exercises to help minimise the number of delivery vehicle trips.

Larger drones require small runways and therefore safeguarded landing sites for drones to land safely is key. Furthermore, incorporating drone landing stations and parcel lockers into mobility hubs within sites will all help to minimise the need for people to travel.

In my opinion, this is just the start of an evolving technology. There are clear benefits to using drones; decreased journey time, improved reliability and drones’ ability to operate in all conditions without risk to humans. But for them to make a major contribution, rather than just being a ‘specialist solution’ there needs to be significant advancements in technology and legislation needs to catch up.

“Whereby, once they were seen as pie in the sky (if you’ll excuse the pun), but they are now being seen for their real potential to be used for good and improve our lives. As a drone operator, I’m finding the technology is there but regulations and legislation are somewhat slow in catching up.

“If this does get funded, hopefully it will mean the regulation side of things also has to catch up, which can only be a positive thing.”

DronePrep’s Gareth Whatmore stated: “Drone deliveries may not be the best solution for all deliveries; some people still want the human face. However, it’s all about establishing where drone deliveries provide a better solution and where they add value.

“Project Skyway can help to unpack issues with regulations, establish acceptable routes, undertake large scale community engagement and help showcase that you can fly planes and drones in the same airspace.”

It is evident that Project Skyway is a real statement and could be a world-leading project that leads to greater investment in the drone industry and greater exploration of travel via autonomous drones.

Will the idea ever take off? The test corridor offers the industry the chance to trial different delivery options and establish the market where drones offer an enhanced service, while also offering the chance for legislation to catch up with technology which, in my opinion, can only be a good thing.​