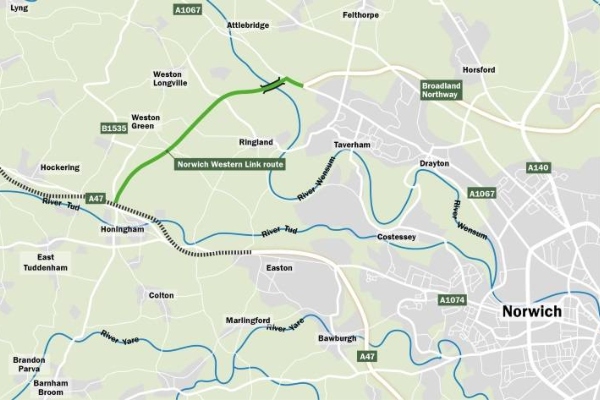 A £168 million investment by the government into Norwich’s Western Link would boost the local economy, reduce accidents, and cut journey times and carbon emissions, according to a report.

Norfolk County Council’s cabinet is set to consider appointing a main contractor for the scheme, as well as submitting a business case to the Department for Transport (DfT).

The Government is being asked for an investment of 85% towards the projects £198 million overall cost, in turn leveraging national investment into the local economy, with the project also representing ‘high value for money’ under DfT criteria.

Cllr Martin Wilby, cabinet for highways, transport and infrastructure said “The Norwich Western Link is a crucial part of our plans to boost Norfolk’s recovery, through major infrastructure improvements and is a high priority in our plans.

The Government has ruled this is high value for money, so we expect it to fund a massive injection of money into Norfolk, delivering a road that so many people and businesses want and showing their confidence in Norfolk.”

The proposed road would be 3.8 miles long and would link the Broadland Northway with the A47, with an estimated 30,000 vehicles using it per day.

An additional £22 million would be spent on environmental measures, such as green bridges and wildlife underpasses following extensive surveys.

The cabinet is set to decide on June 7. If the recommendations are approved, preplanning and public consultations will start in the autumn, with a planning application submitted early next year.

If permission is granted, work would start in late 2023, with the road opening in late 2025.