All aboard for green bus shelters in Milton Keynes 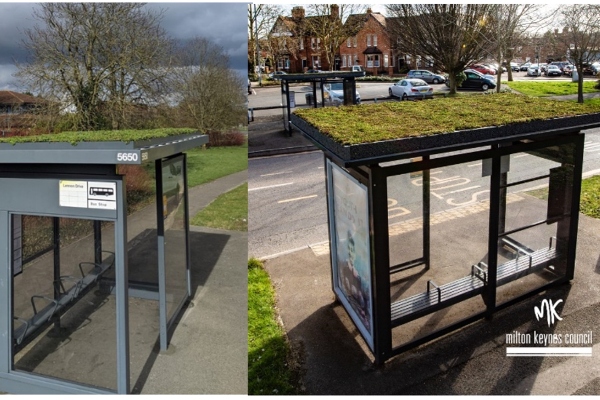 The city of Milton Keynes is installing carbon-reducing bus shelters, as part of a pilot project backed by Milton Keynes Council. The shelters will have living green rooftops made up primarily of Sedum plants which will create a habitat to attract bees, bugs and butterflies.

Initially, the shelters are being installed at 30 busy bus stops to help increase biodiversity whilst reducing vehicle pollution. If successful, the shelters will be installed as other bus shelters get upgraded.

The project received £50,000 in funding from the council and is part of the plan to make the city carbon neutral by 2030, and carbon negative by 2050.

Cllr Jenny Wilson-Marklew, cabinet member for climate and sustainability at the council said “As well as providing a habitat for many small pollinating creatures and improving biodiversity, the green roofs will be a great signal for MK’s green and sustainable ambitions. It’s just a small part of our bigger plans but will help remind people that MK is a clean and green place, and we welcome all kinds of green behaviours and ideas.”

The new roof’s are being installed by Axiom and Bridgeman and Bridgman; Chris Bridgman said “We’ve worked with living roof designer Dusty Gedge of the Green Infrastructure Consultancy to develop the pioneering roof system. It’s the first time this approach has been undertaken on such a scale anywhere in the world and we can’t wait to get started.”