Beaconsfield and Henley have risen to the top of a national table of the best performing retail centres in Britain as shoppers turn to their local towns.

The Harper Dennis Hobbs (HDH) Vitality Rankings 2021 has placed Beaconsfield first with Henley second out of 1,000 town centres. The table weighs up the health of high streets and shopping centres, based on factors including the change in residents’ movement, vacancy rates, and suitability to local consumers’ demands.

Beaconsfield moved up from 64th since the last time the HDH research was conducted in 2019 while Henley rose from 28th.

Fiona Brownfoot, retail director at Hicks Baker in Reading, said the findings match her experience of people favouring their local high street by shopping locally for essentials, much of it driven by home working.

She said: “The places people want to be are the likes of Henley and Wokingham, market locations, because that’s where the footfall is. People working from home are spending their money closer to home.

“If you look at how that translates into rents, rents in Reading town centre will show a substantial drop compared with pre-Covid rents whereas in somewhere like Pangbourne, rents will not have moved and locations like Henley will have seen only a very small drop.

“It’s about the vitality of centres because it’s providing people that live there with what they need. There’s definitely a drive to embrace and support the local high street and that will not go away.”

She added: “Big towns over the years have been victims of their own success because major brands have wanted to move in and take space but you end up with clone zones where every high street looks the same.”

Philip Brown, head of office at Savills Reading, reports a direct effect of the reduced rents.

He said: “The downturn in rents and vacancies in Reading provide a unique opportunity for retailers in the region. Many sites remain fitted and occupy prime positions, allowing new and exciting brands to consider locations that might previously have been unavailable or too expensive.

“Acting for Baird Group, Josh Howe from our Leeds office, for example, recently acquired the former Oasis unit in The Oracle shopping centre who are now trading as SD The Home of Menswear. It is great to see new entrants into the market and we look forward to welcoming more new and exciting brands to the region.”

The HDH research can be seen at http://hdh.co.uk/wp-content/uploads/2021/02/HDH-Vitality-Rankings-2021-Commentary-and-Methodology.pdf

Image (above): Google. Below: The top 25 of the HDH Vitality rankings. 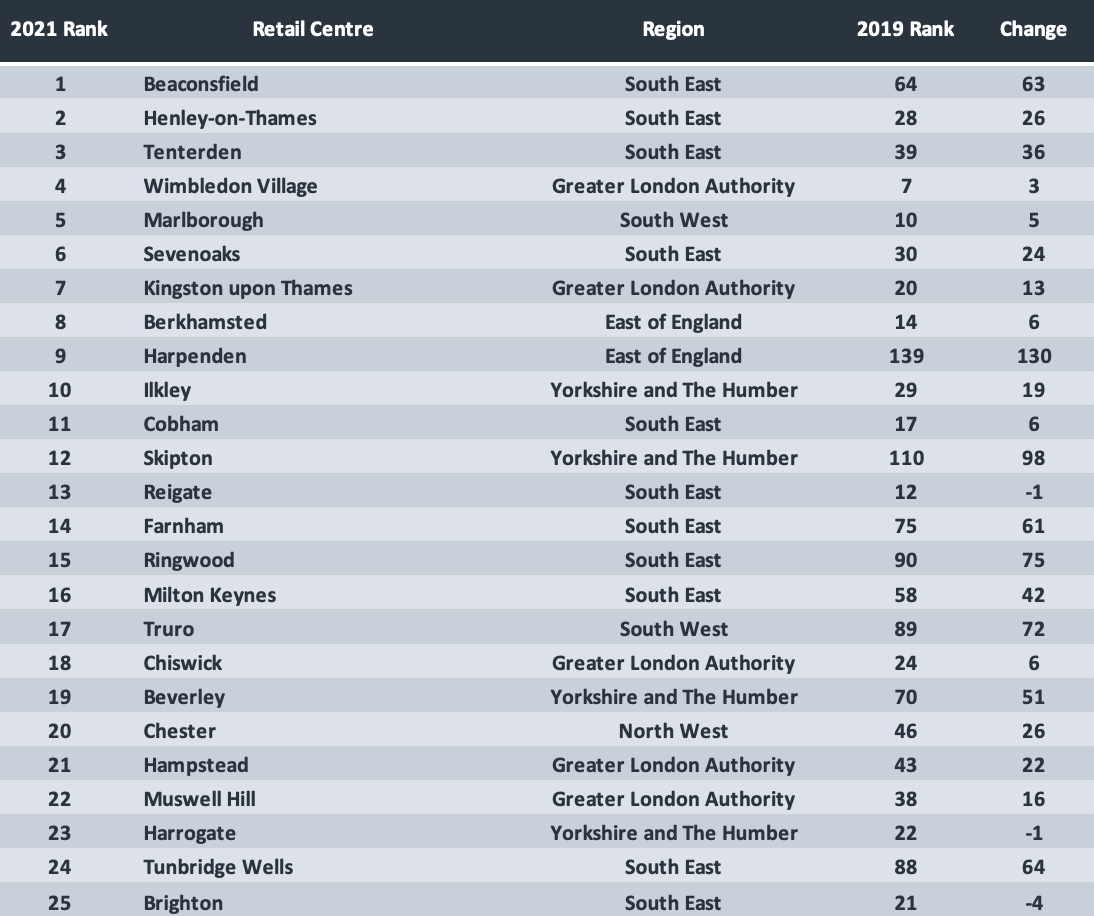