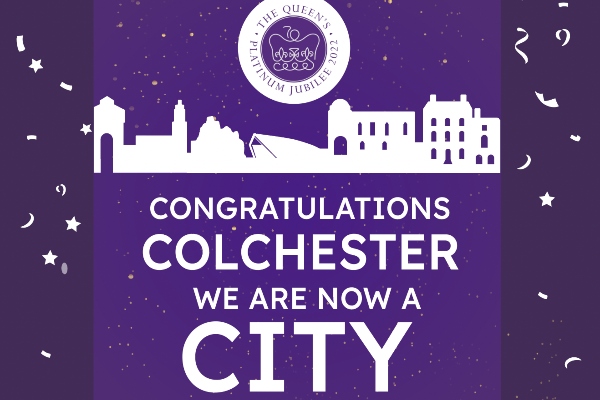 Colchester, Essex, has been granted city status to mark the Queen’s Platinum Jubilee, one of eight towns being made a city.

Colchester is Britain’s oldest recorded settlement, first recorded by the Romans, and following four failed attempts to gain city status in 1992, 2000, 2002 and 2012, it is now the second-largest newly appointed city by population, second only to Milton Keynes.

The Mayor of Colchester, Cllr Robert Davidson, said: “On behalf of everyone in Colchester, I would like to thank Her Majesty for this wonderful honour in her Platinum Jubilee year. I would also like to pay tribute to everyone who backed Colchester’s bid, including HM Lord Lieutenant of Essex Mrs Jennifer Tolhurst, and all those who worked so hard to make city status a reality in this extraordinary year.

“We hope that this wonderful announcement will offer new opportunities for local people and provide a bright future for generations to come.”

Cllr David King, leader elect of Colchester Borough Council, said: This is truly great news. A defining moment in the long history of our borough that will raise our national profile and attract the kinds of inward investment that is only open to cities. With city status comes more opportunities to boost the local economy, create even greater social opportunities, and promote our rich heritage and culture, to the benefit of all our residents.”