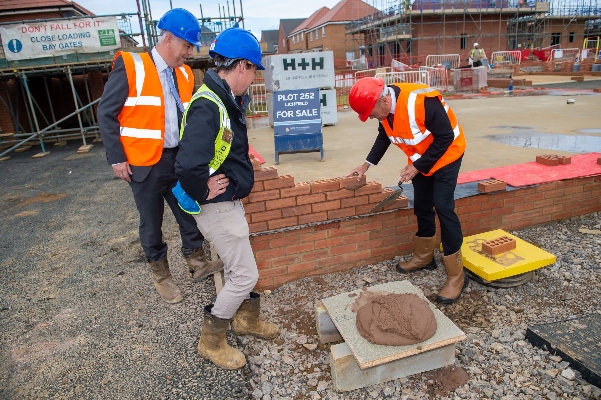 Housebuilder Barratt and David Wilson Homes recently welcomed Daventry MP and Minister of State for Transport, Chris Heaton-Harris to its Overstone Gate development for a tour in Northamptonshire.

The MP was invited on-site to have a look at ongoing construction work taking place, being shown around by contacts manager Kyle Shelton and site managers Carl Webb and Ian Bott. On the visit, he was guided through the different stages of building a home, before being shown a show home giving him a taste of what a fully furnished home may look like.

Overstone Gate has been well received by buyers since its launch a year ago, becoming one of the most sought-after developments in the area.

During his visit, Mr Heaton-Harris met the team at the development and discussed plans for the new community with managing director of Barratt and David Wilson Homes South Midlands, John Dillon.

MP Chris Heaton-Harris said “I would like to thank the team at Barratt and David Wilson Homes South Midlands for inviting me to take a look at their Overstone Gate development in my constituency. It was really interesting to learn about the archaeological findings at the development, and to see how the new homes site is investing in the local area including a highway contribution worth more than £7 million.”

John Dillon, managing director at Barratt and David Wilson Homes South Midlands said “We were delighted to welcome Chris Heaton-Harris MP onto the site and discuss our fantastic Overstone Gate development. It was great to show him the plan for the site and give him an opportunity to view the ongoing works.”