Election changes – and a new way to view them 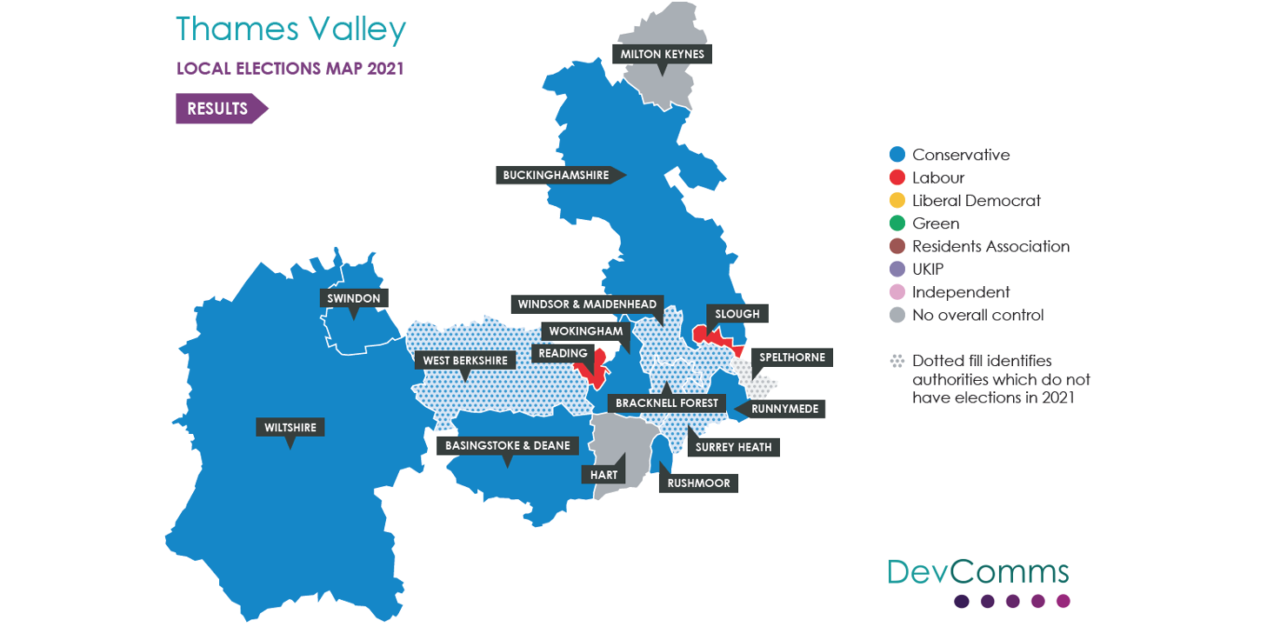 Across Buckinghamshire, Berkshire and parts of Hampshire and Surrey we have seen the Conservatives win the most seats while Labour suffered the biggest losses. However, we have also observed an emerging pattern seen in previous election cycles which is independents making the most net gains.

The Conservatives have held on to political control of all their authorities but have gained control of Buckinghamshire Council in its inaugural election – technically the Conservatives already had control of the council following the merger of the four districts and the county council last April but now it is official!

Council Leader, Cllr Martin Tett, retained his seat but it remains to be seen whether a leadership challenge emerges ahead of the full council meeting later this month.

Surrey County Council’s results bucked the trend for the Conservatives in the Thames Valley as they lost 14 seats on the council – the party’s biggest loss in the region. Whilst still in control of the council, the Conservatives now lead with a reduced majority. The Lib Dems, independents and residents’ association candidates made the biggest gains.

In Wiltshire the Conservatives lost seven seats but still maintain a comfortable majority – the Independents won seven seats whilst Labour lost four and the Lib Dems lost two. Council leader Philip Whitehead announced that despite retaining his seat, he will not seek re-election as Leader of the Council.

The biggest casualty from the election was the Labour leader, Cllr Andy Croy, who lost his seat to the Conservatives in Bulmershe & Whitegates. The leaders of the Conservative group and Lib Dems both retained their seats.

In Reading, Labour comfortably held on to control of the council but didn’t win any additional seats. The Green Party made one gain by a wafer-thin majority of 10 votes over the Labour candidate in Redlands ward where Labour member, Cllr Tony Jones, stood down after 30 years as a councillor.

Elsewhere in Berkshire, Labour maintained control of Slough, securing 11 of the 14 seats up for election on the council. Not a great surprise given that both councils are considered Labour’s strongholds in the Thames Valley.

We will look at Oxfordshire in an election update, covering The Oxford – Cambridge Arc, next week.

Take a look at our ‘slider’ map which shows that predominantly there were no significant changes in political control following the 2021 local elections, with the exception of Basingstoke and Deane which was a Conservative gain from no overall control.

Drag the slider feature across the map to show the before and after picture.