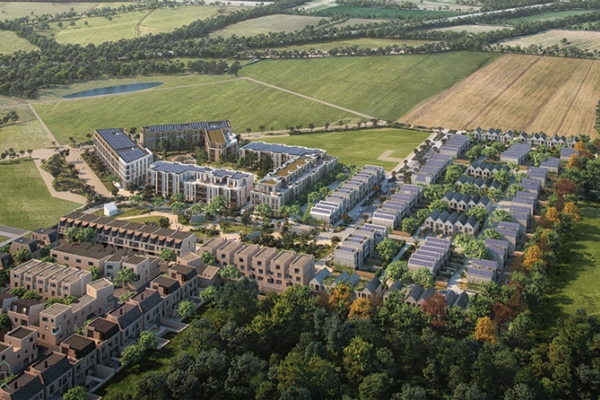 The University of Cambridge has selected the new Built to Rent (BTR) firm Present Made as the preferred bidder for its 10-acre site at Eddington Campus.

The firm plans to deliver a £160 million single-family build to rent scheme on the site, totaling 373 homes, in commencing its £1.6 billion development pipeline of more than 3,000 homes.

The scheme was launched earlier in the year in collaboration with Jo Cowen Architects and has been selected as the preferred bidder following a 12-month procurement process.

The development will consist of 261 flats across four blocks of up to five storeys, and 112 three- and four-bedroom houses, built around a central garden and public area. All homes will be constructed using modern methods of construction (MMC), as part of a wider net zero carbon scheme.

Richard Jackson, managing director and co-founder of Apace Capital and chief executive of Present Made said “We thought strategically about where we had wanted to start off: that was the Oxford-Cambridge Arc. For us to be able to launch a flagship development on university-owned land and to sit alongside them and hopefully form the basis for a longer-term partnership and other developments in the future was very attractive.

We also felt that growth of businesses on the back of that infrastructure would continue, and as there was further inward migration of people there would be more demand for rent, which is structurally growing in the UK anyway.”

The Eddington scheme is the first part of the North West Cambridge Development, the largest in the University’s history. Named after astronomer and physicist Arthur Eddington, the scheme has been in motion for the past decade, with outline plans approved for 3,000 homes in 2013, along with 2,000 rooms of student accommodation, one million sq. ft of employment space, senior living, and a hotel.

Jo-anne Cowen, CEO of Jo Cowen Architects said “Present Made at Eddington will be characterised by a high-quality of architecture and a highly-liveable public realm, with the idea of time well-spent being central to the concept.

We have designed a sustainable neighbourhood focused around people, not cars, which aims to connect an intergenerational community with one another and improve the quality of everyday lives through high-quality homes and streets.

The scheme aspires to create 1,500 saleable homes in total; the first of which are being built by Hill Residential. The Present Made development will be the first BTR scheme in the development.