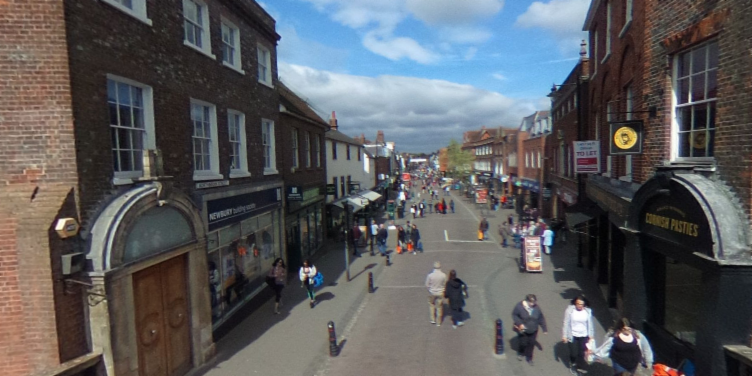 A new masterplan for Newbury is to be drawn up, it was announced at the town’s annual conference.

Delegates at the New In Newbury event at the Corn Exchange on November 11 heard Nick Carter, chief executive for West Berkshire Council, announce the authority’s aim to start work next year on a new plan for the town.

Mr Carter said: “It is time that we re-visited the town’s original masterplan which was written in 2003.  Most of the projects have now been completed and we need to look ahead to 2036.”

He said consultants will soon be appointed.

The announcement came at the end of a morning of talks and presentations to around 100 guests. Connectivity, people, places, infrastructure and sustainability were recurring themes and a number of key statistics were announced. They included:

* The town has lowest void rate of any high street in West Berkshire.

* Newbury has one of the highest start-up rates in the UK for the digital tech sector as measured by UK Tech Nation.

* £58 million has been distributed by the Greenham Common Trust to local businesses, charities and causes.

* After 13 years of planning wrangles, work has begun on the Market Street development which includes 232 flats.

* Commencement of improvements to the A4/Hambridge Road junction is planned for January 2020.

* Commencement of the infrastructure work funded by £2.9m investment at the Sandleford Park project. Completion is due in September 2021.

* Completion by March 2020 of the £7.25m National Cycle Network from Newbury to Ascot.

The meeting also heard the London Road Industrial Area development will be subject to a development brief. It is intended to become an area for employment but will also have a residential element.

In addition, Iain Wolloff from the University Centre Newbury (UCN) confirmed work will start next year on phase two of UCN which was granted planning permission in August. He told the meeting the UCN will tick all the required boxes for sustainable development, achieving BREEAM ‘excellent’.

Richard Stacey, managing director, Evoke Transport Planning and a long-standing Newbury resident, was at the meeting.

He said: “It was an important conference; interesting to hear of so many exciting schemes being planned and projects that have commenced recently.

“Good development progress is being made and Newbury is slowly carving out an identity for itself, as a great place to live and visit.

“The new masterplanning exercise will be a critical next step and I look forward to hearing about the approach at next year’s conference.  The town must get this right.  Placemaking with the supporting infrastructure will be key.”

Ian Young, director at YA Property and a stakeholder and focus group leader with Newbury West Berkshire economic development company, said: “A number of speakers at the conference, whilst talking on diverse topics from the future of transport/mobility for the town, Greenham Business Park and  economic development amongst others, all seem to be pulling in the same direction, seeking a thriving and progressive future for Newbury .

“We believe the University College to be a great project for Newbury, which is already gaining interest and support from business in the area, and will provide an excellent range of skills in a new education format.

“We encourage any parties interested in inward investment into West Berkshire to contact the Newbury West Berkshire Economic Development Company for further details.”