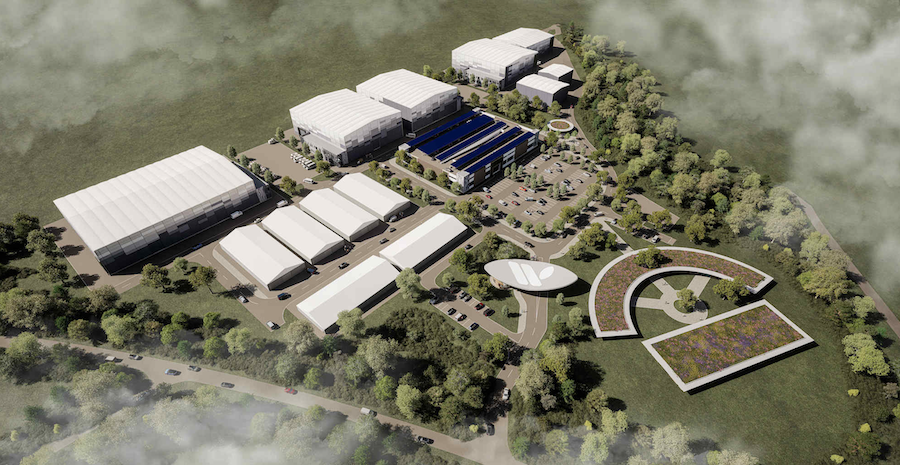 Stage Fifty’s plans for an eight-stage film studio, designed for some of the world’s top producers, have been submitted to Buckinghamshire Council.

The Wycombe Film Studios, planned for a 26-acre site off the M40 just outside the town, is expected to support around 1,200 jobs. A decision from the council is due by January 2023. The site’s first stage has temporary planning approval, however the new application is for full permission.

Stage Fifty says its plans include tree screening, green walls on the stage buildings and specially-designed cladding with faded grading, intended to help the stages merge with the landscape.

Chief executive James Enright said: “We want to build a sustainable studio that the people of Wycombe are proud of, one that will create exciting new jobs for the community and generate around £305 million GVA (economic output).

“As soon as we have a decision from the council, everything can happen in a short timeframe, as the design of our innovative sound stages means we can build quickly. Once the studio is fully operational, it will support around 750 full-time jobs and 450 indirect jobs in the supply chain.

“And we’ll develop the skills of young local people by offering traineeships and industry placements at Wycombe Film Studios through Stage Fifty’s Academy of Creative and Technical Arts.

“Our goal is to build a studio that is not only sustainable in its construction but a place where people are excited to work in the heart of Buckinghamshire. Ultimately, we want Wycombe Film Studios to set the benchmark, attracting filmmakers from all over the world.”

Stage Fifty says it has designed carbon out of the scheme and buildings will be clad in timber and have green roofs with solar panels where possible.

“Stage Fifty are an experienced film studio operator and are therefore uniquely placed to source productions and operate the studio. Unlike other property sectors, it is not just a case of ‘build it, and they will come’.

“Experience, track record and contacts are required for productions to be confident in a studio.

“In this regard I am pleased to confirm that Stage Fifty are already in discussions with a number of high profile film and TV productions who love the scheme and location.”

The scheme was designed by TP Architects which acted both as architect and masterplanner for the project.

Director Ed Drysdale said: “Having developed the project over the past two years, we are excited for the project to take a step forward.

“Aside from the wonderful socio-economic benefits which the film studios will deliver, it has been fantastic to assist a client who is so passionate about the quality of the built environment, wanting to develop campus-like studios with beautifully landscaped amenities and attractive and interesting buildings. Sustainability is at the heart of the proposal and carbon will be designed out of the scheme wherever possible.”