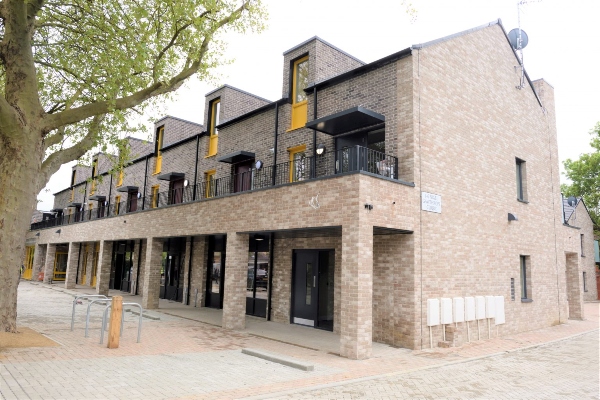 The development is on a brownfield site and saw the replacement of an older building with eight one-bedroom flats and six two-bedroom maisonettes.

Tom Hill, regional director of Hill said, “it is wonderful to see this site transformed and delivering these brand-new council homes as well as the much-anticipated new community centre which was an important facility for local residents prior to the pandemic and will open later in the year.”

Cllr Mike Davey, executive councillor for finance and resources at Cambridge City Council and CIP board member said, “as a partnership, we are continuing at pace to deliver brand new council homes in Cambridge, and I am delighted to see the progress and handover of these new houses at Akeman Street.”

As well as the homes, CIP is also set to deliver three retail units and a new community centre, all of which they hope will be open later in the year.

The maisonettes are located above the community centre and retail space, with the development also featuring a communal courtyard garden between the two buildings.

Since its creation, CIP has exceeded its commitment to build 500 new council homes by March 2022 a year early, helping to address the acute housing need in Cambridge by delivering new council developments.