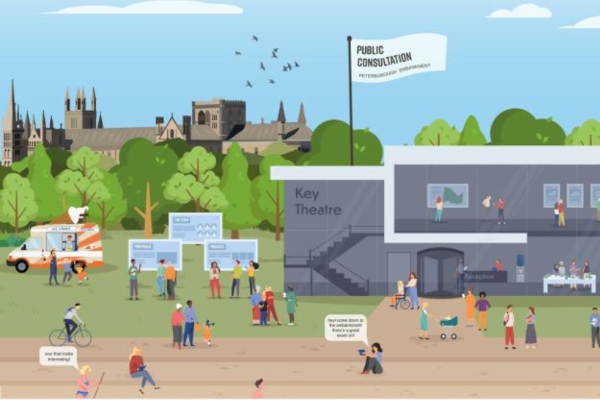 A public consultation has been launched on the future uses of Peterborough Embankment, with residents urged to voice their views.

A month-long campaign coined ‘We’re Talking Peterborough Embankment’ has been launched by the council, who are seeking to obtain the public’s views on the most desirable use of the Embankment and nearby Middleholme, which lies next to the River Nene.

The aim is to try and prevent a slow and gradual area of development, which is already focussed on by ARU Peterborough and Peterborough United Football Club.

The move comes after the City Council decided to commission independent experts to develop a masterplan for the area, using £200,000 of funding obtained from the Government’s Towns Fund, and an additional £100,000 donated by the Cambridgeshire and Peterborough Combined Authority.

The feedback obtained will be used to start shaping the masterplan, before the public is asked to evaluate the potential options for the site, with a full exhibition planned for later in the year where they can speak with the masterplan team. The masterplan will also engage with other stakeholders such as ARU Peterborough and Peterborough United Football Club.

A spokesperson from We’re Talking Peterborough Embankment said “It will ask local people how they use the Embankment, what they like about the area and what they would like to see improved. Once complete, the masterplan will guide and inform development in the area strategically, allowing for a comprehensive look at aspirations and proposals for the area rather than reacting to development requests on an individual basis as the city expands. Although it would have no formal planning status, it could be considered in the next review of the city’s Local Plan. If included, it would be used to guide Peterborough City Council’s planning committee in future years.”

Councillor Wayne Fitzgerald, leader of Peterborough City Council, said “This is a once in a lifetime opportunity to shape a large area of our city in a well-planned and strategic way, that best fits the wants and needs of local people. It’s important that everyone with an opinion makes their views heard by filling in the survey.”

Dr Nik Johnson, Mayor of Cambridgeshire & Peterborough Combined Authority, said “The Combined Authority is committed to investing in the future of Peterborough, and we were happy to jointly fund a plan to transform and inspire. But before anything is done, it’s vital that local people, the community the plan aims to serve, help to mould that future by speaking up on what they most want and need from this area. I urge everyone who cares about the city to use the survey to make their opinions really count.”

The final masterplan will be presented to the council in early 2022.