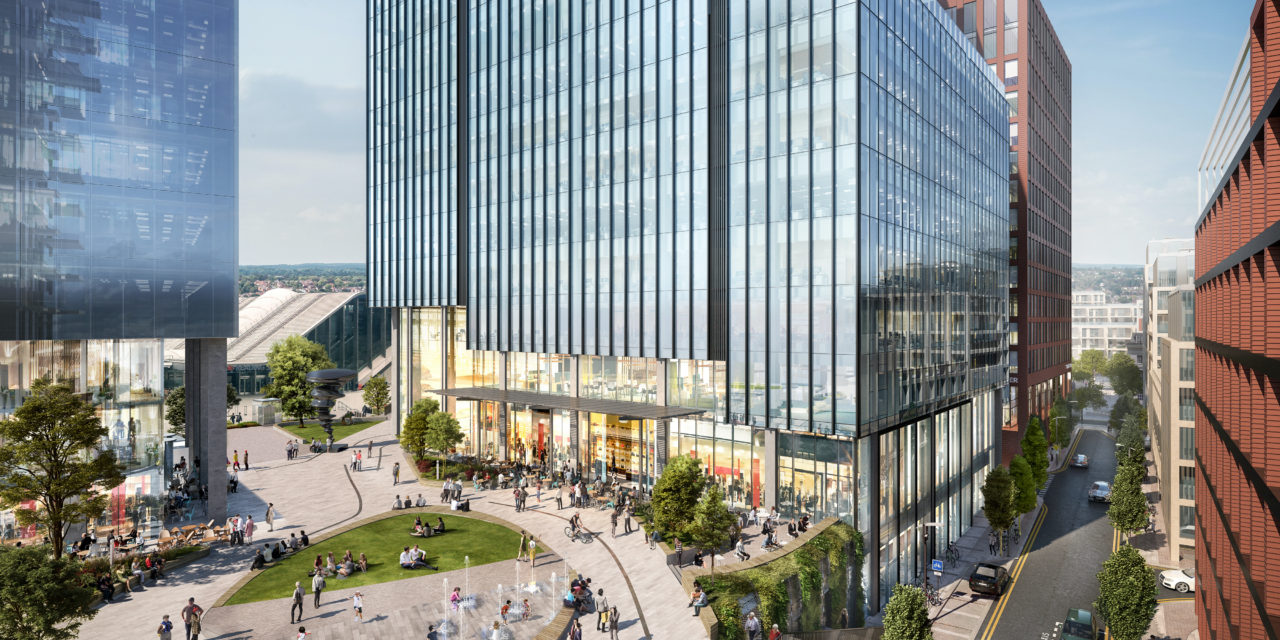 Thames Tap spoke exclusively to agents from Hatch RE and JLL who are working on lettings, and Alex Aitchison, director of development at Lincoln Property Company UK, as the announcement of the appointment of main contractor Sir Robert McAlpine (SRM) was made.

Work on 275,000 sq ft ONE Station Hill is under way and discussions with occupiers have been ongoing for several months.

Tom Fletcher, director of Hatch RE, said: “In terms of the occupiers, we are having multiple conversations ongoing with a diverse range of occupiers from different sectors; technology, pharmaceuticals, professional firms and flex space providers.

“While the Thames Valley and Reading has a particularly strong background in tech companies – in reality it’s arguably the capital of the South East, outside of London – it attracts a whole host of different types of occupiers.

“We have not targeted anyone in particular in terms of sectors, this will be attractive to all. You’ve only got to look Thames Tower next door and the diversity of occupiers in that building. Station Hill will be the same.”

He said all sizes of occupiers will be accommodated including growing start-ups with potential to be the next Facebook.

Mr Aitchison said: “We are allowing for that within the design, it will be flexible. The whole scheme has been designed to accommodate all those users. We are two years from PC (practical completion), that’s fantastic. That’s just down the road. It’s coming, it’s happening and this announcement (of SRM) is proof of that.

Once complete, Station Hill will have up to 625,000 sq ft of office space, 1,300 homes, and 100,000 sq ft of retail and leisure space which may include a 200-bed hotel, later living accommodation, and central two-acre piazza.

Mr Aitchison said the ONE Station Hill will be best-in-class London-style offices, focussed on sustainability, wellbeing and technology.

The potential for occupiers to move out from London to save costs, a long-talked about potential market for Station Hill, is still a trend that could benefit the scheme.

Mr Fletcher said Riot Games is one occupier to move from London to Reading while there are others in One Valpy.

But Mr Aitchison said cost is now less of an issue for those sorts of occupiers.

He said: “I feel, previously, they may have been able to save in terms of occupancy costs in terms of rents, rates and service charge. I think that, maybe, that used to be the driver for people to move out of town.

“Yes, clearly there are some savings but I think that’s come down the order quite a lot. We have already seen deals across the Thames Valley at much higher rents for those best-in-class credentials that are just as good as a London product, which people want to move out of town for, and be in a well-connected location. They are happy to pay those rents.”

By contrast, a rising occupier priority is ESG (environmental, social and governance) credentials and Station Hill is keen to present its offer.

Mr Fletcher said: “In terms of wellness and sustainability, these things were tick boxes five years ago, but now they have really come to the fore.

“As a result of Covid, people have realised that health and wellbeing is so important that companies have strong ESG policies and strategies now and Station Hill can help companies – and help them achieve their net zero carbon targets.”

Ollie McLeod, director, office agency at JLL, which is working alongside Hatch on lettings, said: “Occupiers who are looking at this building (ONE Station Hill), get additional benefits that a soulless stand-alone building just doesn’t have.

“When you look at all the community infrastructure that this is delivering with the public realm, events curation, public art and building that sense of community – the eco-system of all those different uses, and the connections through the town centre, that’s additional value-add you would not usually get as a lone office occupier. It’s really compelling to those tenants we are seeing.”

The offices will sit alongside the first phase of 600 Build-to-Rent (BTR) flats. Enquiries have come in from potential office occupiers seeking both office and residential space. Mr Aitchison said enquiries for 50-100 residential units have come from some of those also seeking office space.

While thousands of BTR flats are in the town centre pipeline, Mr Aitchison believes there is some way to go before the market is saturated and said the BTR experience and expertise of Lincoln Property will help benefit the Station Hill scheme.

Having the combination of residential, offices, amenities and public realm, he believes, will help differentiate ONE Station Hill from other products. Mr Aitchison said the apartments are designed to have generous space, including storage space and can be flexible enough to adapt to social and economic changes.

He added: “I think it’s an increasing concern of occupiers – where does their workforce live? How do they commute? How do they ensure they get into the office? Is there good quality accommodation? In London, it’s too expensive. Where can you get that workforce? It’s that war for talent argument.”

Mr McLeod said the quality of the flats is key to benefitting the whole scheme.

He said: “I think the residential apartments Lincoln MGT are developing will be a huge step for Reading. Until now I don’t think Reading has really had the professional quality of accommodation in place to offer all these amazing young employees who want to base themselves there, not just to work, but also live the lifestyle that affords as well. Now they will have the option to do that which is really exciting.”

As well as public realm, public art and an events programme, temporary ‘meanwhile’ uses such as a box park (ie shops in shipping containers) will be considered before the third phase is built. If those uses prove successful, they could be relocated into the final scheme as permanent features.

Retailers, restaurants and bars in the ground floor units will be differentiated from those already in town.

Mr Fletcher said there will be no rush to select the retailers but the offer will be a curated one.

He added: “It’s a new style of quality offer. We are not looking to secure the typical national retailers. They are already in Reading, such as in The Oracle. We want to provide a fresh, independent style of offer but it’s got to be the right offer.

“There’s an awful lot of thought going into that.”