Next stage of The Oxford Science Park to go ahead 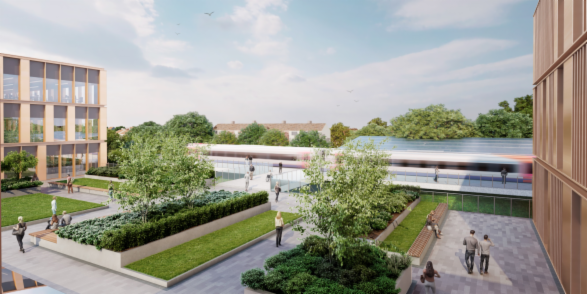 The next stage of The Oxford Science Park (TOSP) is set to go ahead next year after detailed planning permission was granted for 19,600 sq m of offices and laboratory space.

The plans feature a central raised plaza along with wider landscaping and accessibility improvements and will connect with the new station which will be built with the expected re-opening of the Cowley branch line.

Construction on the Perkins and Will-designed scheme is planned to start in Autumn 2020 and will represent one of the largest commercial workspace commitments Oxford has seen.

The first building is expected to reach practical completion by early 2022 and discussions are under way with a number of parties over pre-lets.

“Oxford’s science and technology sector is thriving and at The Oxford Science Park we are witnessing unprecedented growth.

“The development of Plot 16 represents another major step in the evolution of the park and our plans are a catalyst for the re-opening of the Cowley branch line which is an important infrastructure initiative that will reinforce our convenient connectivity with the city centre.”

As well as Perkins and Will, the planning and design team members on the project also include Studio DBM, Hoare Lea, Campbell Reith, Core5, 3PM and Savills.