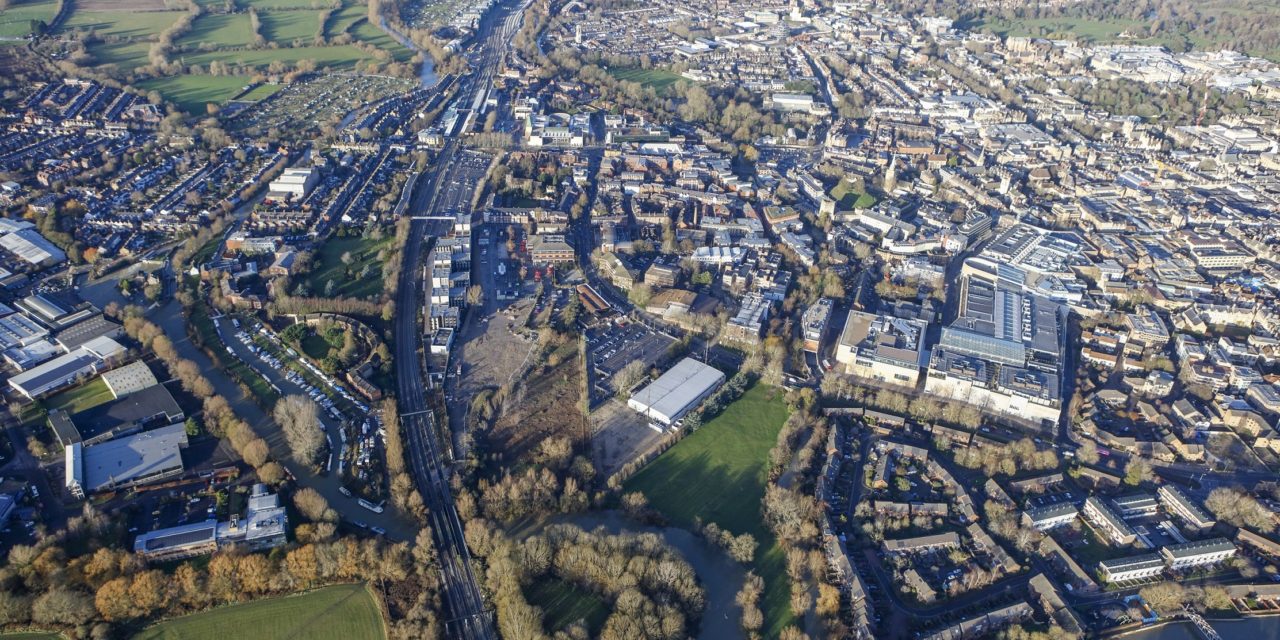 The long-awaited Oxpens development in Oxford is set to move forward with a new funding drive and a planning application due in early 2022.

OxWED, joint venture between Oxford City Council and Nuffield College, has announced both organisations will discuss raising investment at separate meetings on March 10 to fund the proposals which include more than 450 homes and employment space for more than 3,000 people.

If both approve the investment, consultation will take place in Summer with an outline planning application submitted by early 2022.

OxWED has commissioned a team which includes masterplan architects Hawkins Brown and landscape architects Gillespies to prepare an indicative masterplan for the 20-acre site to establish its potential and what regeneration could look like.

The development will include new public realm and plans to make the most of its relationship with the river.

Extensive cycle and pedestrian routes will connect to a new bridge over the River Thames that will link Osney Mead with Oxford city centre.  The new development also aims to link the scheme with Oxpens Road, due for upgrading for the forthcoming Zero Emission Zone and Connecting Oxford proposals.

Kevin Minns, managing director of OxWED, said: “Oxpens is a unique and timely opportunity for Oxford and one we want to bring forward successfully and in the right way.

“In particular, it can deliver both homes and the larger commercial buildings needed in an innovation district to drive economic prosperity, all within a highly sustainable location just a few minutes’ walk from the railway station, Westgate shopping centre and Oxford city centre.

“Momentum is building in the West End and we’re looking to share our ambitious plans later this Summer and get people involved.  To do that, our next task is to secure investment funding so that we can get them ready for that important community input and consultation.”

Cllr Alex Hollingsworth, cabinet member for planning and housing delivery, said: “I am delighted to have reached this significant milestone in the future redevelopment of the Oxpens site.

“This is testament to the close working relationship Oxford City Council has formed with its joint venture partner, Nuffield College.

“The delivery of the Oxpens scheme is a top priority for both organisations, with the potential to deliver a genuinely mixed-use scheme creating a new community and new jobs – against the backdrop of our city’s recovery from the Covid pandemic.

“The recommendation to move forward to the submission of an outline planning application, funded by the shareholder partners, demonstrates our shared long-term commitment to this project and the city.  It will give greater control over the project and better financial returns for the council.”

In addition to the progress on Oxpens, the Government is expected to announce its decision on proposals from Network Rail for a multi-million-pound investment in Oxford Station imminently, the first phase of the wider regeneration of the station and associated rail infrastructure.

Image: Oxpens (centre of image) is a key West End regeneration site, encompassing land stretching from the river and the railway through to Oxpens Road – it includes the Oxpens Road car park site and Royal Mail sorting office.