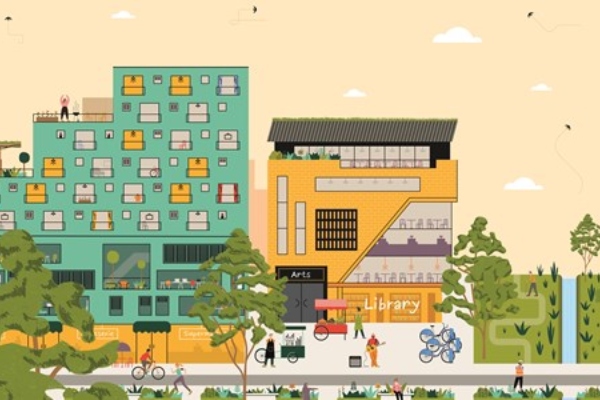 Following a public consultation last year, the plans for the Cambridge North East development will be revised, following feedback from local residents and businesses.

The North East Cambridge Area Action Plan, which focuses on the area on both sides of Milton Road, will now be scrutinised by local councillors prior to considering whether it can be published for the final round of public consultation.

The development includes 182 ha of brownfield land a 15-minute bike ride away from Cambridge city centre, the site being a former water treatment works, set to be relocated using the Government’s Housing and Infrastructure Fund. This will make way for 8,350 new homes and will create 15,000 new jobs with associated infrastructure.

The vision for the development is a healthy, accessible, and low carbon district with a mix of high-quality homes, workplaces and service provision. Its location crosses the boundaries of both Cambridge City and South Cambridge District Council, who are working together to ensure local residents and businesses are involved as the area develops over the next 20 years.

Significant changes to the Area Action Plan include a reduction in building heights, decreased housing densities and commercial space, an increase in the amount of open space provision and biodiversity, and an increase in the number of shops and community facilities.

Cllr Katie Thornburrow, executive councillor for planning policy and transport at Cambridge City Council said “We have listened carefully to the thousands of comments we received in our consultation last year and made real changes as a result. We have kept the ambition for a low-carbon, walkable and lively neighbourhood – which you strongly supported – while lowering the heights of buildings and increasing the amount of open space. We are really grateful to everyone who helped by commenting during the consultation and giving us important insight into what you felt would make North East Cambridge a great place to live. We’ll keep listening to residents on this – such as through our North East Cambridge Community Forum which launched early this year.”

Cllr Dr Tumi Hawkins, lead cabinet member for planning at South Cambridgeshire District Council said “North East Cambridge has been identified as a major opportunity for regeneration for many decades, and as a brownfield site with fantastic walking, cycling and public transport links, we want to make sure it delivers on its full potential. We are hugely excited to see this plan come to fruition through the input of residents, businesses, and groups around the area. The changes we have made will guide development here to be as green as possible, creating a real neighbourhood where everything you need – shops, community facilities, jobs, and open spaces – will be on your doorstep. It will be a fantastic place to live with affordable, beautiful homes, helping meet the housing needs of the next generation.”

Over 4,000 responses were received following the public consultation in 2020, which have been considered alongside further research carried out by Greater Cambridge Shared Planning Service.

The Area Action Plan is currently published as a Proposed Submission and will be inspected by councillors in both councils before it will be decided whether to approve it for the final round of public consultation and submit it to the Secretary of State.

The plan will only be able to progress to public consultation after the Development Consent Order Process for Cambridge Waste Water Treatment Plant has concluded, as the Area Action Plan is based upon the water treatment works no longer being on site.

The Area Action Plan is set to go in for consideration with the Joint Local Plan Advisory Group when they meet on November 30.