Plans revealed for £2 billion tidal barrage across The Wash 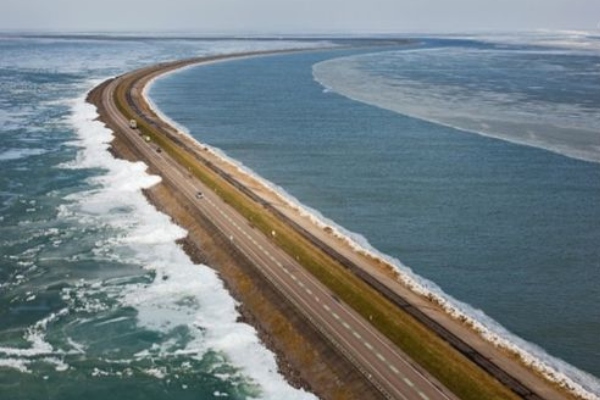 Plans have been revealed for a £2 billion tidal barrage across The Wash, a bay in between Lincolnshire and Norfolk.

The 17.7 km barrage, known as Centre Port UK, would stretch between Gibraltar Point and Hunstanton and is intended first and foremost to “provide guardianship of the ecology of The Wash and Fenlands” according to the developer, Port Evo.

It is set to feature the world’s first tidal energy-powered deep sea container terminal, act as a flood defence and have rail and road elements.

Turbines beneath the structure will harness tidal energy from The Wash’s 780-km2 tidal area, which is said to be enough to power circa 600,000 homes and businesses in the region.

The infrastructure will provide a flood defence for the whole of The Wash area, extending to Peterborough and Cambridge, protecting more than a million people.

It will be the world’s first tidal energy-powered container terminal, able to service 1.5 million 6-metre equivalent containers from 23,000 6m equivalent ships after phase one.

It will have quad lift cranes able to pick up four 6m containers or two 12m containers on each lift, meaning ships will spend less time in port.

Port Evo says the offshore location will simultaneously provide a high level of security while ensuring there is no land-side noise or light pollution.

A dual carriageway will run from the container terminal to the Lincolnshire side and a single carriageway between the terminal and Nofolk.

This will cut the journey time between the two counties from 2.5 hours to 20 minutes, creating a “new powerhouse” for business.

Rail infrastructure is also part of the proposal, with four terminals proposed. The developer intends to connect it to the East Coast Main Line.

It is also being promoted as a levelling-up opportunity, as it will provide over 1,000 job opportunities during and after construction, with more than 300 full-time skilled jobs also being created within the port in south Lincolnshire.

The green energy from the hydroelectric dam is set to create manufacturing opportunities across research and development.

The project has received six-figure seed funding from energy specialist Centrica, with which it also has a power agreement. The project is now looking to raise £8m for a two-year feasibility study, on which it will engage with environmental and technical consultancies.

Its fate will ultimately be decided by the government Planning Inspectorate, as it will be considered a Nationally Significant Infrastructure Project.

“Centre Port provides multiple business opportunities and a lower/zero carbon operation across the import/export chain, whilst also being 50% nearer the East and West Midlands it serves.

“It is well placed to drive new economic opportunities in Lincolnshire/Norfolk and Cambridge, job creation and levelling up in local communities that are otherwise reliant on the agricultural sector.

“The local environment is seriously at risk from climate change. Our mission is to retain the Wash boundaries, its wildlife and ecology and to minimise climate change impacts that could devastate these sensitive areas.”