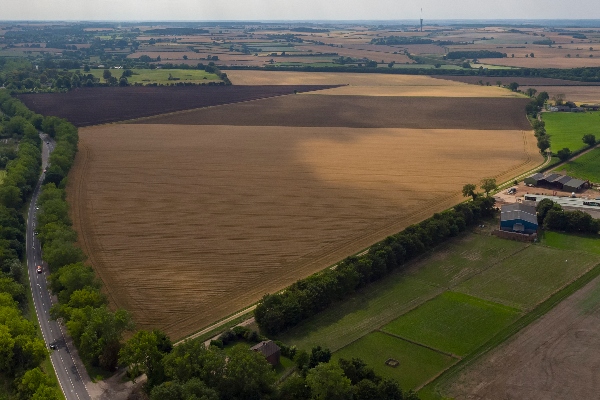 Savills completed almost £500m worth of land sales across the East of England in 2021 – paving the way for over 8,600 new homes.

Agents said that demand for land for residential development in the East of England remains high – with significant competition for sites and a high number of bids leading to an increase in prices.

Significant deals in the region included the sale of a 166-acre site at Great Haddon in Cambridgeshire with permission for 1,499 dwellings bought by housebuilder Vistry Homes.

In Essex, a 71-acre site at Great Leighs near Chelmsford with permission for 525 homes was sold to Bellway Homes, while Bellway Homes Thames Gateway purchased the former water treatment works at Fobbing, near Thurrock, which has been earmarked for 168 homes.

In Suffolk, a 58-acre site at Candlet Road in Felixstowe, with permission for 560 properties – 35 per cent of which will be affordable – was sold to Persimmon Homes, while in the neighbouring county of Norfolk Taylor Wimpey purchased a 64.5-acre site with permission for 550 homes at the Birch Gate development in Wymondham.

Elsewhere a 93-acre site to the east of Stevenage in Hertfordshire with planning permission for 618 homes has been purchased by Redrow, while a 15-acre site with permission for 150 homes at Towergate in Milton Keynes was bought by Crest Nicholson.

Richard Janes, head of development at Savills in Cambridge, said: “Fuelled by an exceptionally strong housing market there remains continued demand for good-sized sites in the East of England benefitting from plenty of surrounding countryside and good connectivity via existing road and rail networks.

The shortage of supply – in particular for sweet spot sites up to 200 homes – has heightened competition and led to the highest growth in land values since 2014 when housebuilders were replenishing their pipelines and increasing their output supported by the economic recovery and start of Help to Buy.

Most housebuilders bought more sites in 2021 than the previous year and they are now getting back to pre Covid-19 levels of land buying which is enabling them to fill gaps in their pipelines and to progress their future growth strategies.”

Andy Redman, head of development for Savills across Essex and Suffolk, said: “The fundamentals of the development market remain extremely strong and whilst the market, in general, is underpinned by demand for housing outstripping supply there are noticeable trends such as a move to more home working which is making locations which might previously have been dismissed now becoming targets for developers.

Looking ahead, although there is some uncertainty around rising build costs, we expect market activity to remain at levels similar to last year – with opportunities for all parties and those taking innovative approaches likely to see the best returns.

Growth of the Build to Rent sector for example is likely to continue, while at the same time the private and affordable housing markets remain robust, with strong demand from developers not merely in the traditionally strong areas of North London and Essex but also pushing out into more rural locations.”