£16.7m bid could speed up science park at Salt Cross 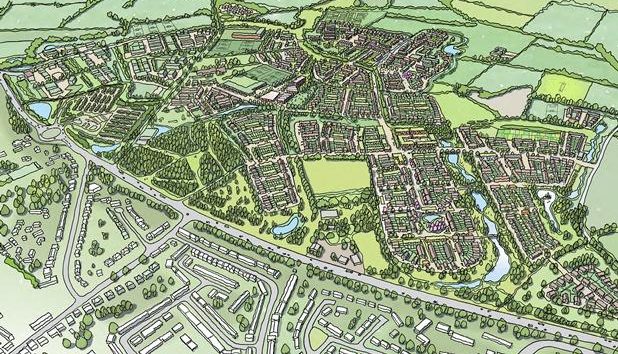 A bid for £16.7 million from the Government’s Levelling Up Fund could help speed up the delivery of a new science and technology park at Salt Cross.

West Oxfordshire District Council has submitted the bid in an effort to allow the authority to provide a new pedestrian and cycle underpass across the A40 near Eynsham and a new roundabout on the same road which will serve a planned new business park, part of Grosvenor Developments’ proposed 2,200-home garden village scheme.

The proposed park is unlikely to be built for years but, if the funding comes through, the council believes it can speed up its delivery.

The underpass would link settlements either side of the dual carriageway including Salt Cross.

The money would also help fund a regeneration project in Carterton.

Leader of the council, Cllr Michele Mead, said: “We know that there are a lot of highly skilled people in Carterton and not many jobs to serve them so this regeneration project would look to address that balance.

“Carterton has huge potential, and if we are successful with the bid it will help us start a project that would look to invest in the area and kick-start new jobs and businesses coming to Carterton, supporting future generations.

“It is important that we submit bids like this to help bring vital funding into West Oxfordshire and we will continue to do so where we can to help improve our communities. Now we will have to wait and hope we are successful.”

Councils which have been successful in bidding for levelling up funds will be announced in Autumn.

A Government-appointed planning inspector was starting a two-week hearing on the area action plan for Salt Cross on Monday, June 28. If the scheme gets the green light from the hearing, it will then go through the planning process.