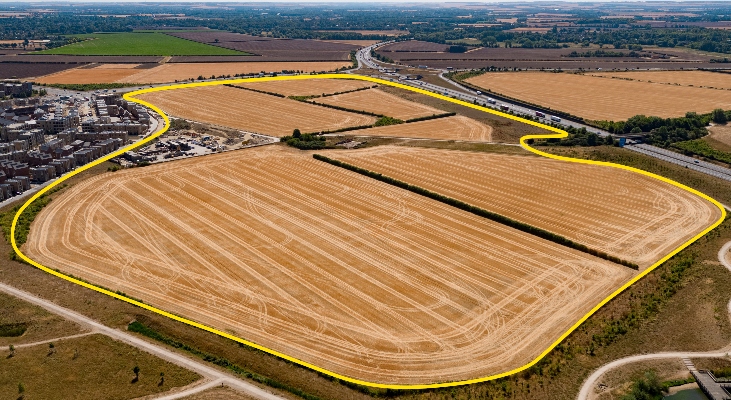 A piece of land to the south west of Cambridge has been put up for sale and could potentially be developed for a range of uses.

The 74.26-acre site at South Trumpington is currently on the market with property firm Savills, acting on behalf of Trumpington Meadows Land Company Limited.

The land is bordered to the north by the Trumpington Meadows housing development (nearing completion) and includes a primary school, community centre and new country park. To the south is the M11 and to the east is Hauxton Road.

William Newton, part of the development team at Savills in Cambridge said: “The strategic land market in the East of England – and Cambridgeshire in particular – remains robust and a general shortage of sites has been fuelling competition. Consequently, land such as this, which is close to Cambridge, near to existing infrastructure and has excellent transport links, often generates interest from a range of parties.

“The site offers a unique opportunity to deliver sustainable growth in a prime location and its position near key employment hubs, adjacent to Junction 11 of the M11 and within a short distance of the new park and ride and Cambridgeshire Guided Busway means it would be suitable for a number of uses – subject to planning.

“Given the demand for new homes we would expect the land to be an attractive option for several housebuilders, however, there is also potential for the site to be used for anything from life sciences and healthcare through to logistics or sports fields.

“Offers are invited on an unconditional basis and preference will be given to parties who can clearly demonstrate they have undertaken a full analysis of the site.”

Savills is now accepting offers on the site, which are to be received by 12 noon on Friday, October 21.

For more details contact Richard Janes or William Newton at Savills Cambridge on 01223 347291,  RJanes@savills.com or WNewton@savills.com.