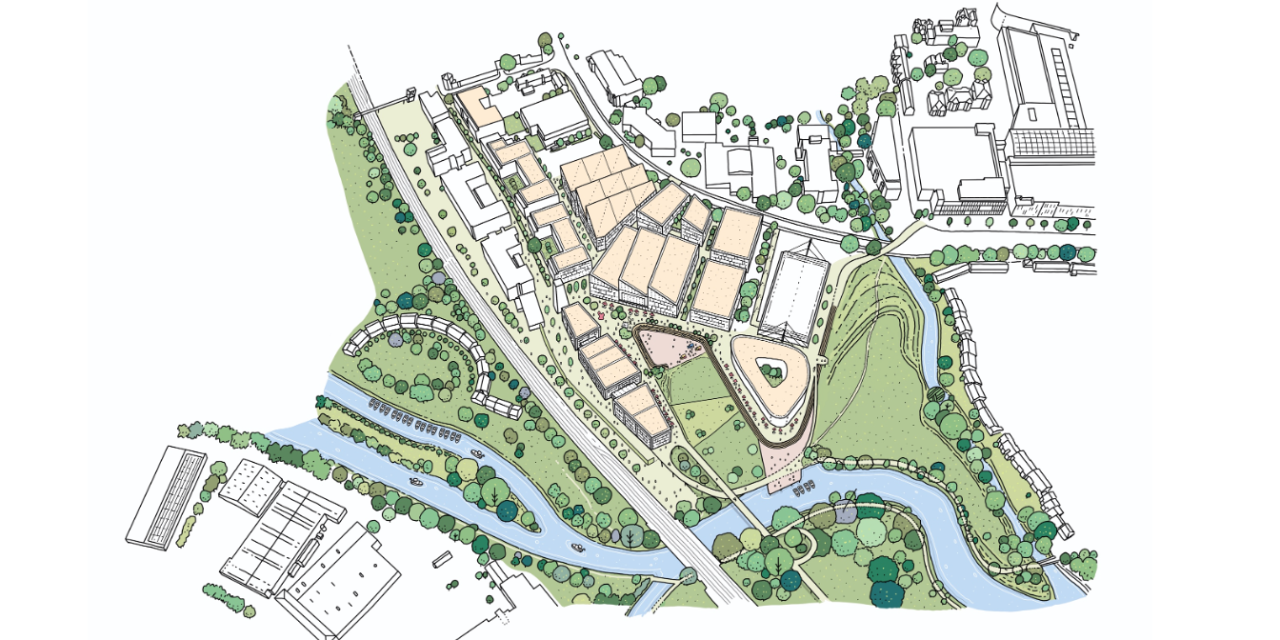 Ahead of the announcement of the first glimpse of the radical plans for the Oxpens project in Oxford, UK Property Forums consultant Hugh Blaza was treated to a tour of the site by OxWED managing director, Kevin Minns.

We’re picking our way gingerly down a two-metre steep bank of compacted rubble from the disused railway sidings which form part of the site.

Having successfully negotiated this, a totally unexpected feeling of calm (and relative warmth – it’s another breezy and chilly June day) descends on us.

We’re standing in what is effectively a meadow; the undergrowth and brambles have all been cleared but nature has swiftly replaced it with new green growth.

But it’s peaceful. And when Oxpens is developed, this will be an open public space, at the end of which will be an amphitheatre – for plays, concerts, readings, poetry.

“Won’t that be COOL?” exclaims Kevin. “And with the buildings along its boundaries, even more protected from the noise of trains and traffic!” It’s impossible to disagree.

We’d entered the site from Osney Lane, near the entrance to Student Castle’s new buildings (which are themselves impressive).

A windswept tract of disused railway sidings leads to the scramble down to the meadow and beyond it an area of barren land. It’s hard to take in the scale of this; we’re in the centre of a city which for years people have said is full and constrained.

But there is space here to create something very special. Lots of it. No wonder Kevin’s excitement is bubbling over. Having been involved in so many significant projects in Oxford for over 30 years, Kevin believes it’s all been leading to here. This is the one.

I’ve lived in Oxford for 50 years, give or take, and I had no idea. Not much more than five minutes’ walk from the centre of the city is an area of land which, when developed, will create a corner of the city which will be transformative.

In early July, the first press release announcing the stage which has been reached was published and exhibitions to illustrate the ideas so far will be launched in three separate locations later in the month.

It’s more than four years now since Nuffield College and Oxford City Council started talking to each other about the Oxpens site.

As the managing partner of the law firm which advised Nuffield on the joint venture agreement which was signed as a result, I feel glad to have played a tiny part in getting this off the ground.

And it was pioneering; the old ‘town vs gown’ days were finally consigned to the dustbin of history when Nuffield and the council tied the knot. And what we now have is a collaboration which will catapult the transformation of a tired and under-valued area of Oxford into a quarter which will breathe new life into the heart of the city. Subject to planning, of course.

The OxWED team has appointed masterplan architects Hawkins Brown and landscape architects Gillespies, along with a team of urban planners to prepare the submission of an outline planning application later this year.

Not wanting to tempt fate, but it’s hard to see that approval won’t be forthcoming. If everything is connected (and it actually is) then the rejuvenation of the railway station and Osney Mead will not only benefit from but require the development of the Oxpens site in order to complete the jigsaw.

We leave the site where we came in and scoot round to Nicholas Grimshaw’s ice rink building. Built in the 1980s, it’s in need of a bit of Karcher treatment now, but it will be staying: an ever-popular attraction.

We look at the Oxpens site from the upper deck of the nearby car park. It is huge. Over the meadow, which will be retained, and along Castle Mill Stream, down to the river.

Yes, I knew it was there, but it wasn’t really a destination. The meandering water induces a sense of tranquillity and that’ll be preserved as part of the public realm in the development.

We cross the river by the existing bridge (wide enough to have taken the trains to and from the old, long since gone, gas works) although a new bridge, closer to the centre of the site will be created.

And then along a wooded path (it’s like being on Shotover!) to the (frankly tired) buildings of Osney Mead. We pause to take it all in and head back. A pedallo trundles up the river carrying a gang of city workers.

We part at the Oxpens car park. I’m slightly shell-shocked by the scope and ambition of this project, but in a very good way. And the seemingly boundless enthusiasm which Kevin exhibits is infectious. “It’s going to be so COOL!” he grins. It certainly is.