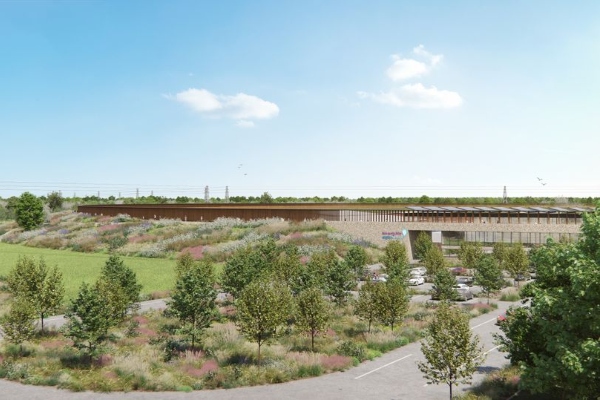 A plan for a new water sewage treatment plant for Anglian Water has been revealed, based near Cambridge, with the second phase of public consultation now open.

Anglian Water is based on Cowley Road currently, however, the firm says the new site is needed to enable development in the northeast Cambridge area, which has 8,000 homes planned.

The proposed area is north of the A14, between Fen Ditton and Horningsea known as Honey Hill, after being the most appropriate site following a public consultation.

Due to the loss of green space in the area, new footpaths and bridleways would also be built to increase accessibility, including to Quy Fen and Anglesey Abbey, in turn creating a circular walking route from the 22-hectare facility to areas nearby.

There would also be an earth bank planted, along with more trees to try and help the site blend into surrounding areas whilst also creating new habitats. An education centre would also be constructed for school trips, helping educate children on the water recycling process.

The new site would be a low carbon facility, visually unlike other centres, and would incorporate odour prevention solutions to minimise the impact on residents. It would recycle water from the city and nearby areas, extracting the nutrients for use on farmland, and generating renewable energy before returning it to the River Cam.

Head of the Cambridge relocation public consultation for Anglian Water Karen Barclay said “We hope the local community is as inspired by this initial design as we are. We’ve drawn on everything from history and archaeology to the present-day wildlife and community needs of the area to create what is a really innovative design for a wastewater treatment facility.

We’ve been guided by experts on how to create a facility that is sympathetic to the environment as well as cutting edge in how it provides what is an essential service to the city and its surroundings.

Most importantly, we are grateful for all the feedback we gathered during our first round of consultation, all of which has been considered as we developed this proposal. It is rare nowadays that a wastewater treatment facility of this significance is built from the ground up, and we fully appreciate people and communities may be anxious about it.

We hope our proposals can allay some of the concerns previously expressed and show that we are genuine in our intent to create both a really innovative facility and new space for wildlife, all accessible on new paths that link with the existing local network.”

Once the new site is completed, the existing 180-acre site on Cowley Road will be decommissioned, and then developed into a new city district, located between Milton and Cambridge North, with plans for the area including 8,000 new homes and 20,000 new jobs.

Anglian Water said all responses to the consultation would be taken into consideration in developing the project further before the next stage of consultation early next year. This phase of consultation ends on August 18, with webinars being held on July 7, 8 and 10.