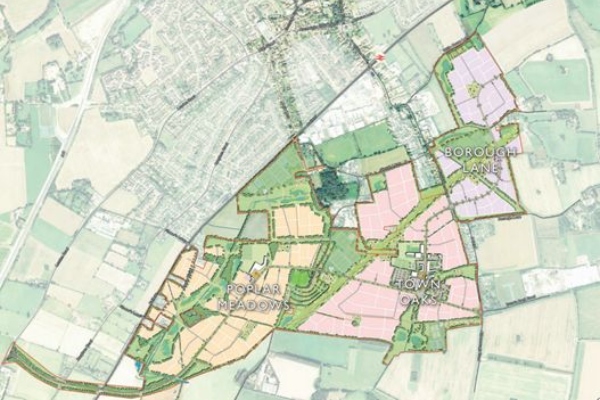 Ptarmigan Land has sold the first phase of their 4000-unit site at Attleborough to Homes England.

The project was the largest planning application in England in 2019, set to deliver three new neighbourhoods, and focuses on sustainability, incorporating parks, wetlands, and woodland habitats, as well as features such as play areas and sports pitches for residents.

They also plan to bring in new 30-minute bus pedestrian and cycling routes into the town centre to try and boost high street shopping.

The vision is focussed around sustainable placemaking and started with a community planning weekend where 400 local people participated in workshops, discussions, walkabouts and in hands-on planning groups and defined principles for sustainable growth.

Member for planning at Buckland Council, Paul Claussen said “We welcome this major step forward which will see the plans for a significant number of new houses become a reality. This significant development will help to meet the demand for new houses in the district, including affordable homes for people starting out on the property ladder. It will also enhance education, infrastructure and leisure facilities locally, so we look forward to construction getting started next year.”

The plans were then drawn up between JTP Architects, Attleborough Development Partnership, the Town Council and Neighbourhood Plan team, considering what the community had said. It has been announced that work will begin next year on the construction of the first houses.

Chief Executive of Ptarmigan Land Charles Wheatman said “With works set to start in 2022, the development will deliver a significant number of construction jobs for local people and represents a major investment in the local economy. We are delighted to be working with Homes England on this landmark scheme, which will benefit both existing and future residents of Attleborough.”

Attleborough had been identified in the local plan as a suitable area substantial housing and employment growth, with Ptarmigan Land also paying for the development of a link road between Buckenham Road and London Road, and a new footbridge over the Leys Line railway, both expected to be completed by the time the 1,200th home has been built.